Profiling The Irede Foundation (TIF) on International Day of Persons with Disability 2019.

Amputation surgery is an orthopedic surgical procedure carried out as the last resort, when limb salvage is not feasible. It is usually associated with social, emotional and psychological disturbances to patients and their families.

Limb loss is much more common than many people realize, and its numbers, growing by the day. It is sad to know that statistics on the numbers of amputees especially in the developing world are staggering. Globally, there are more than 1 million annual limb amputations -— one every 30 seconds.

The estimated prevalence of extremity amputation in Nigeria is 1.6 per 100,000. Reports have revealed that the number is expected to double by 2050, which will by the way be faster than population growth. Meanwhile, limb loss isn’t just costly in the financial sense; it is expensive psychologically too.  According to research, approximately 30% of people with limb loss suffer from depression, anxiety, or both. While the demands on prosthesis in third world countries are often more difficult to meet than in developed countries, one way many organisations have lent their hands(giving their widow’s mite) is in the number of artificial limbs that they have been able to deliver particularly to the less privileged in the society.

As a provider of care and prosthesis for those suffering from limb loss, The Irede Foundation understands the peculiarity of this situation and in their own little way have ensured that if not all,  at least,  some are not left behind even in their bid to making children walk,  run and play again.

In this light,  The Irede Foundation focuses on working with child amputees to give them hope and help them live a fulfilled life. The foundation is able to achieve this feat by educating the general public, while also encouraging caregivers and empowering indigent children between ages 0-18 with artificial limbs.

Limb Empowerment Programme: This program sorts for child amputees whether through congenital limb loss or through trauma, providing them with prosthetic limbs from first contact to age 18. With the goal to extend their voices globally, TIF organizes an annual 2km advocacy walk tagged “Out on a Limb”. The 2019 Walk was themed “ Ensuring Inclusiveness” for children and persons living with a disability. The Walk happens simultaneously across Nigeria.

For TIF, year 2019 has been full of eventful and worthy activities and achievements. TIF 2019 Achievements include:

* Limb Empowerment Programme: The Irede Foundation has been able to empower 21 child amputees with artificial limbs in the year 2019. Cumulatively, TIF has thus far empowered 99 child amputees with 136 limbs across 17  states in the 6 geo-political zones of the country.

* Out On A Limb: Recorded successful walks across 17 states in Nigeria and 7 global locations and recorded over 1,000 people in attendance with an indirect reach of 10,000. 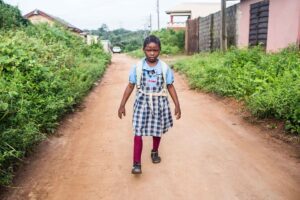 *Media Feature:  Few months ago,  The Irede Foundation got featured on the top two Global Media Houses: CNN and BBC

In the bid to tell the world the story of Irede,  The CNN Changemaker captured the activities of the Foundation through the eyes and voice of the Executive Director as well as the full coverage  of Prosthetic Production (http://bit.ly/IREDECNN)

The BBC African Voices was also able to focus their lenses on people who have become  beneficiaries of the Foundation. http://bit.ly/IREDEBBC

The Irede Foundation is not about ready to relent in their service to humanity, TIF wants communities to be on the lookout and refer that child amputee who is in dire need of a prosthesis to The Irede Foundation, for at the Foundation, they  believe goodness has come to every amputee child that steps into their Foundation.