CHAMPIONING THE CAUSE OF THE NIGERIAN CHILD

Ms. Oluwatosin Taiwo was inspired to begin her humanitarian work when she was posted to Kogi state for her National Youth service in 2006 and saw the plight of young children in that area; in that period, she embarked on educational projects to give underprivileged children in the state, a chance at education. 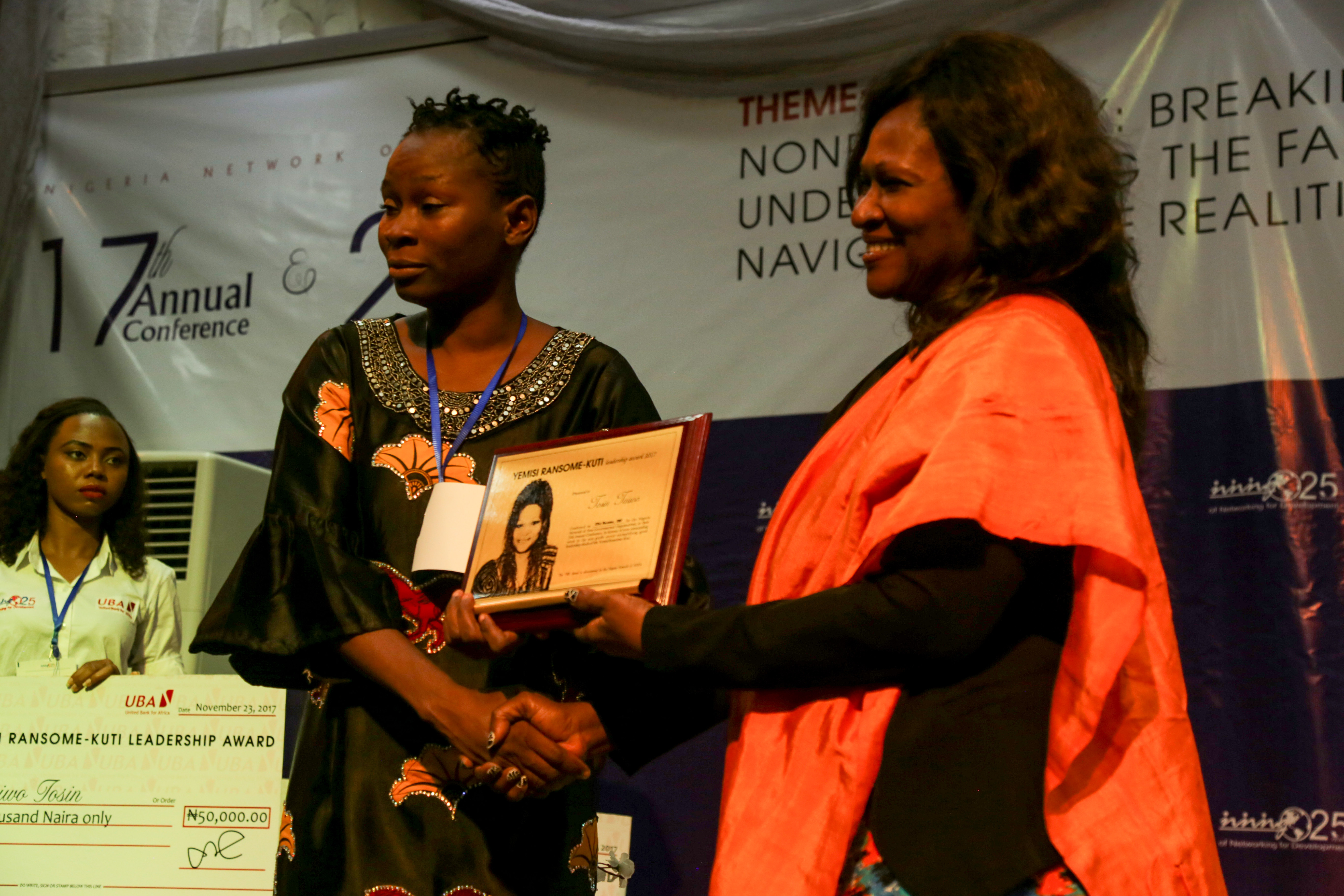 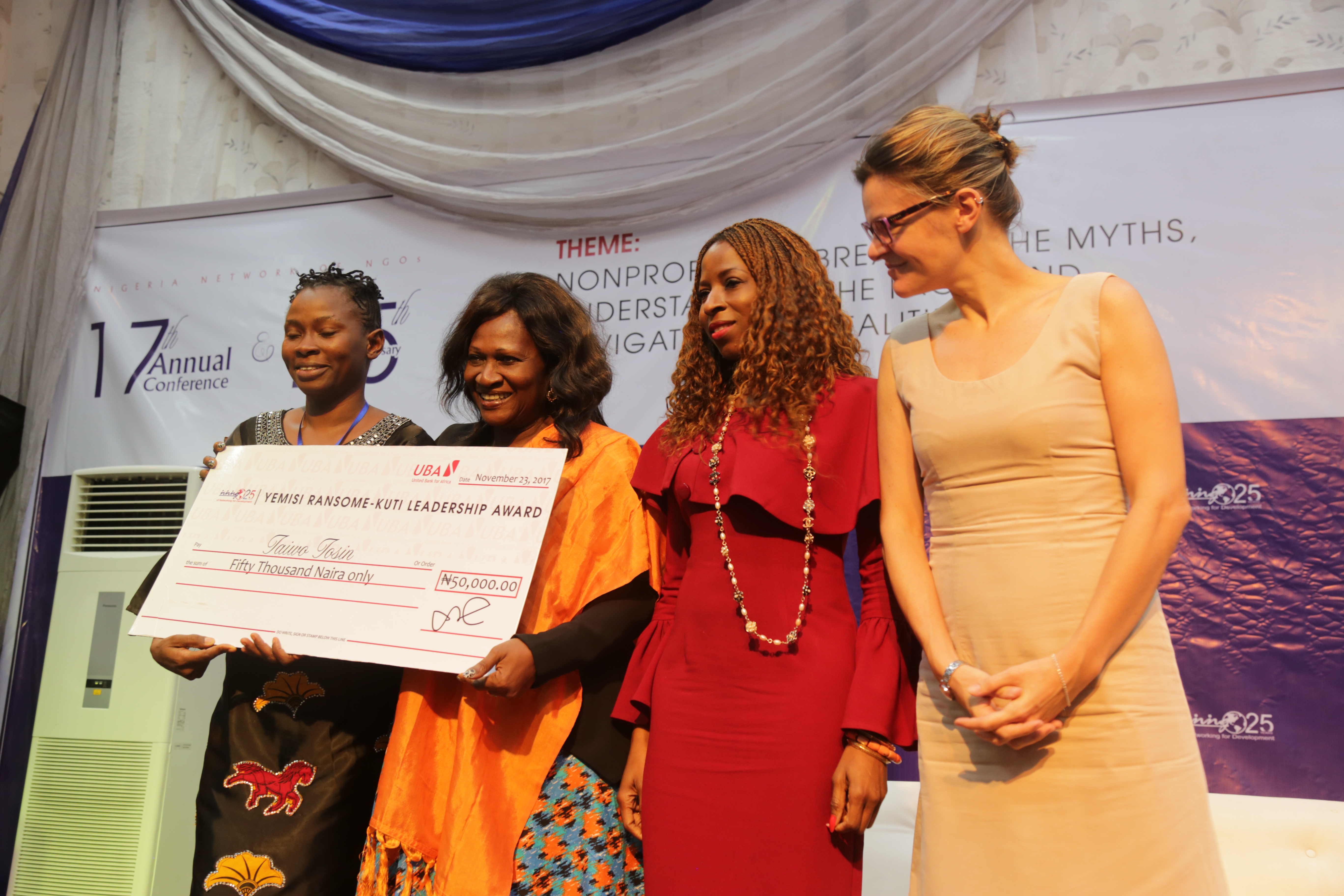 Along with the help of the wife of the Governor of the state, she got involved in projects and initiatives which were aimed at empowering physically challenged students in the state. She also embarked on various school support projects across public schools in the state which earned her the award of overall best Corps member in Kogi state for the 2017 set.

She returned to Lagos state and worked in the corporate world for a few years before resigning to venture into humanitarian work, full time. She began to reach out to students in order to empower them in any way she saw fit, provide encouragement and mentorship.

In 2009, Tosin was inspired to act, by the astonishing statistics of 10.5 million out-of-school children in Nigeria. A stunning world record; Tosin therefore founded Street to School Initiative to help support the education programs of children in underserved areas and also to help career progression of high school students in rural communities, by pairing students with young professionals and matured adults for school-based mentoring program.

In 2015, as an intervention program, Tosin established a tuition-free, not-for-profit primary school strictly for out-of-school, street children and primary school drop outs in IKOLA community in Lagos, a community where accessibility to government owned school is poor. Currently, 14 previously out of school, street children, have graduated and are in high school, with over 100 children, in the school.

Since inception of Street to School Initiative, 19 low cost schools, with over 16,488 children have benefitted from her annual School Support Program which involves donation of basic educational items such as notebooks, textbooks, school bags, sandals, educational toys, stationary etc. 258 less privileged students have been registered freely for the GCE/WAEC examination and more than 200 previously out of school children have been supported back to school.

In true Yemisi-Ransome-Kuti fashion, Oluwatosin Taiwo personally champions the daily operations of a free-schooling programme for underprivileged children; along with volunteers, family and friends, hits the streets in search of children who are out of school to enroll in school, provide learning facilities and occasionally feeds the children when funding permits.

Despite facing challenges of funding, lack of support from government and unfavorable economic situation of the country, Oluwatosin Taiwo noted that she is resilient in her fight for education-recognition and alleviation of the suffering of the Nigerian child.

She displays dogged determination which is reminiscent of Ms. Yemisi Ransome-Kuti’s courage in the face of injustice and underdevelopment. She is undefeated in her fight to expand her radical ideas on bringing education to the doorstep of every child in every community across Nigeria.

CHAMPIONING THE CAUSE OF THE NIGERIAN FEMALE

Her vision for women empowerment and the girl child education was borne as a result of her struggles to attain western education. This was one of the major reasons she chose to work in the Niger Delta, Nigeria where women’s rights were and are still being violated on a daily basis. It was on this note that she founded the Niger Delta Women’s movement for Peace and Development, NPWPD. 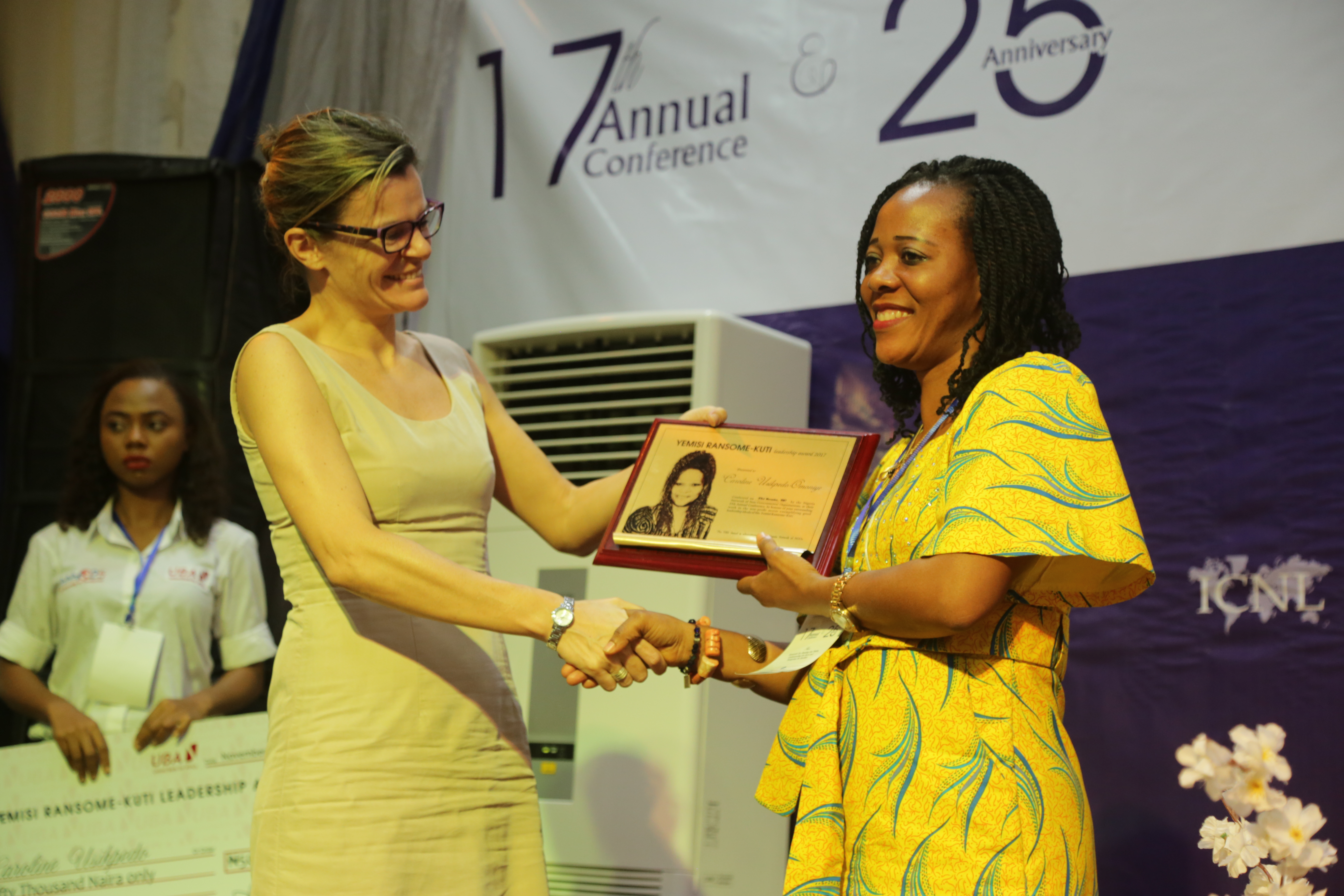 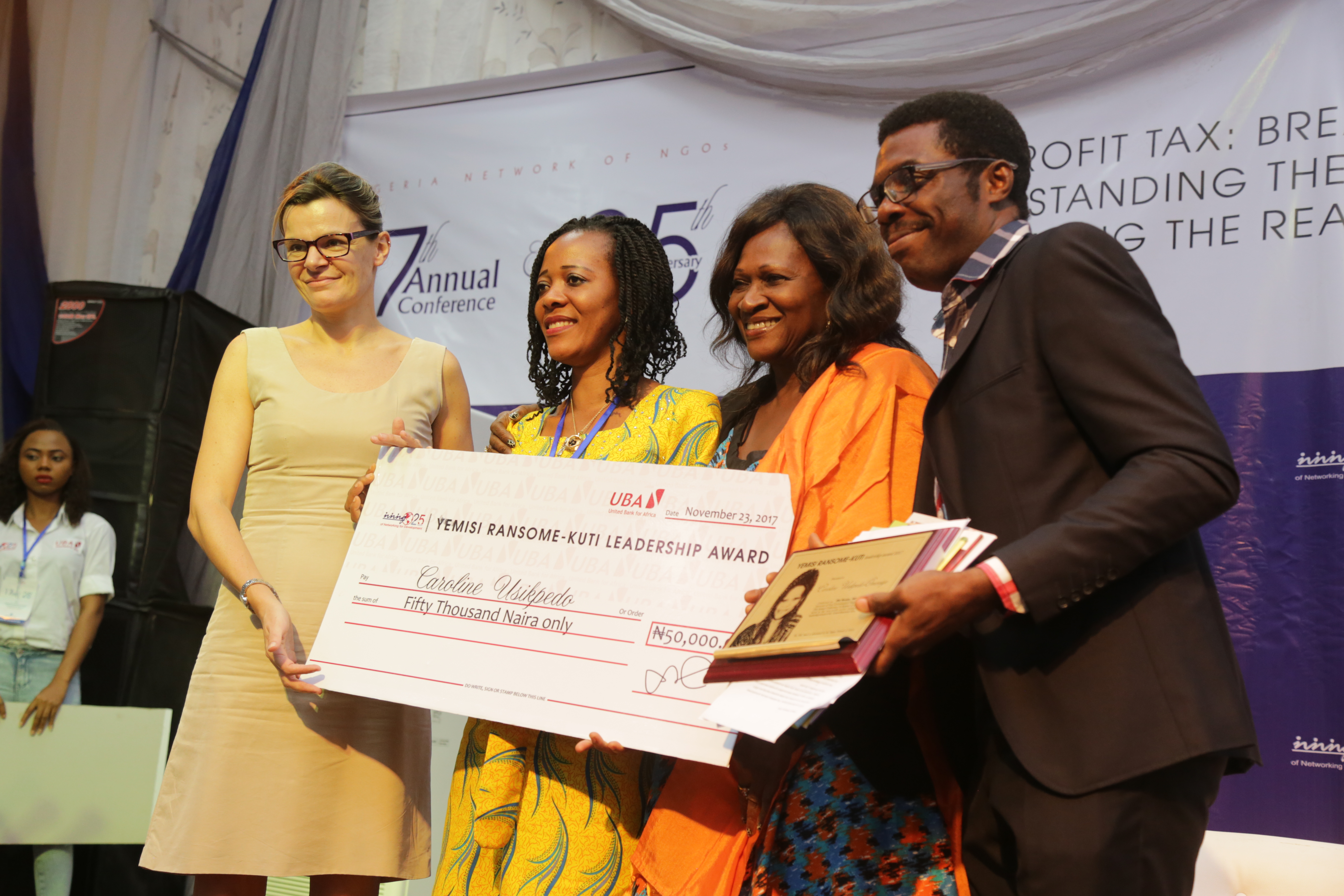 From 2008-2012 She mobilized for the GCAP, “Stand Up Take Action Campaign Days”, International Day of Climate Action, and the United Nations Human Rights Day in the Niger Delta.  Because she knew all about the oil spills too well, she often mobilized hundreds of women who would hold peaceful campaigns to protect their homeland from multinational harmful environmental practices and policies.

In 2013, Mrs. Caroline Usikpedo-Omoniye led the protest against the forceful eviction of more than 450 traders, demolition and relocation of the over 50-year old popular Ughelli goods market. As the National President of NDWPD, she sought the support of relevant authorities including the Nigeria Network of NGOs and Urgent Action Force as well as prominent individuals in the fight against what was widely described as “a gross violation of human, social and economic rights of the market women”. The state government was sued to court and justice was gotten for the women who still occupy the market place till date.

In recognition of her achievement, she was awarded with Special Recognition Award by the United Nations Millennium Campaign (UNMC). Based on her success stories of fighting for Women’s human rights, and Gender Equality, On December 10, 2011, she was appointed Ambassador of Goodwill for Women Empowerment in Nigeria by the International Human Rights Commission and promoted as the Assistant Foreign Affairs Minister in 2013 and currently the Deputy Secretary General for Africa.

On November 28, 2014, she was appointed as the first ever elected young woman President General for the Isoko Development Union (IDU) Women’s wing and through this office, has transformed the affairs of Isoko women from mere businesses to development and career enhancement, while promoting peaceful coexistence.

Her spirit, hard work and tenacity are indicative of the Yemisi Ransome-Kuti legacy of fights against injustice, marginalization and violation. She has displayed resilience, courage and impressive leadership quality in bringing succor to women and girls in her community. Caroline and her organization NDWPD have been committed to reducing extreme poverty by fighting climate change and environmental pollution which is the root cause of poverty in the Niger Delta. Through various projects, she has contributed immensely to empowering women and girls to reduce their vulnerability. Just like Ms. Funmilayo Ransome Kuti, she actively fights for Gender Equality, Women Inclusion in Decision making and Women’s Rights and Empowerment at rural areas, in Nigeria.

Her achievements, work and unrelenting nature stand her out as a worthy recipient of the Yemisi Ransome Kuti Award which is presented to individuals whose leadership within the third sector, activities, causes or organizations has improved community life in any part of the Country.

Little did she know then that a wheelchair would become a support, but today Ndifreke has risen above the wheelchair and now she chairs her way into the lives of the less privileged through her life transforming impacts. – This is Ms Ndifreke Andrew-Essien, the very first YRK Award winner giving insight into the driving force of her charitable works. The Yemisi Ransome –Kuti (YRK) Leadership Award was established in March 2015 to honor outstanding Nigerians working in the not-for-profit sector who exemplify the leadership ideals of Ms. Yemisi Ransome-Kuti, a civil society activist and founding Executive Director of the Nigeria Network of NGOs (NNNGO) . 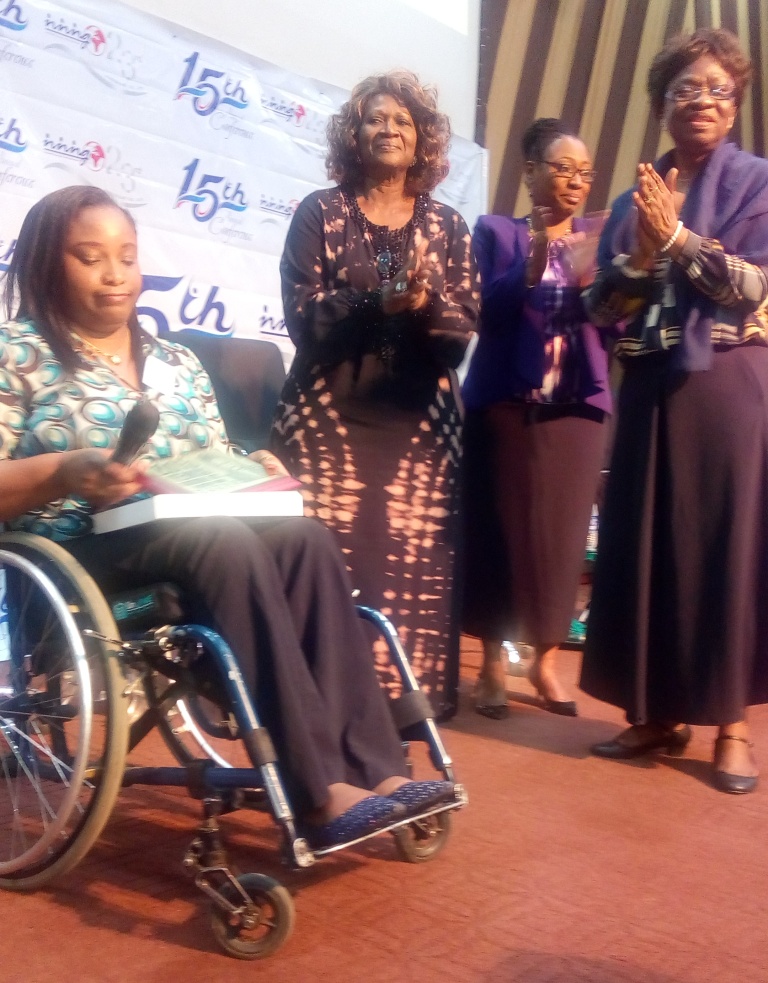 “The accident was absolutely incredible, I never saw it coming” recounted Ndifreke Andrew-Essien in reminisce, who as a young adult in that particular year was on her way to rack up an impressive resume of becoming a medical student at the University of Calabar.

For Ndifreke, year 2002 was a very pleasant year coupled with the fact that she was doing very well in her academics. The day, December 26th, 2002 began with studying, a ritual she had of course grown accustomed to, she then decided to visit friends where at that moment for her it became rather unfortunate that fortune did not smile and met with the never to be forgotten accident even as she boarded a commercial motorcycle on that fateful day.

After two sets of long surgeries (in Tel-Aviv) and being bed-ridden for close to two months, doctors tried to explain nicely the damage that had been done to her back – a burst fracture of spine and that the best surgeries would do, will be to help her sit. “I have had to use a wheel chair ever since and rehabilitate myself to be independent” she confessed.

Independence and resoluteness then became her watchword which propelled the birth of her Foundation Freky Andrew-Essien Care Foundation well known as FAECARE Foundation that has a mission to inspire, motivate and empower creative minds for a better, bright and possible future and going further again with visions to add value to the lives of targeted vulnerable groups with disability and the less privileged in the community and thus creating life changing opportunities for them.

Ms Ndifreke who after the ugly incident could not bear to remain unresourceful, became involved in a lot of volunteering before she began channeling her little energy into FAECARE Foundation hence the achievements which include an annual children’s scholarships to vulnerable children who are out of school and the Hope Again Initiative which is a community based vocational skills which is targeted at female persons with disability.

All of these achievements which are fast becoming a milestone have thus paved way for the recognition of her foundation even in the new ‘hall of diligence and hard work of the YRK Awards coupled with some other international recognition, one of which is the Mandela Washington Fellowship and the recognition which went as far as being able to be part of the 40-member committee who got engaged with the first lady of the United States on issues centered around girl child education.

When asked if she ever felt she would emerge winner of the YRK Awards, she said “I honestly didn’t think I would emerge in the top 10 tackles of winner. Ever since I found myself as part of President Barak Obama’s Young African Leaders Initiative and emerged a Mandela Washington Fellow, I advised myself to take advantage of opportunities even when I don’t rate myself high or feel worthy. When I received the detail via email of YRK awards, I was actually in Ghana on a 6-month internship program at an International –NGO. I think I received at least two mails before I decided to apply. My general thought was that for sure someone in Lagos or Abuja would definitely get it not me far and somewhere busy doing my thing in Rivers state…basically I was thrilled when I got the mail that I had made top 3 and was definitely shocked when I was announced winner during the NNNGO’s conference”.

Ms Ndifreke who did not fail to acknowledge the giant and huge step of the organizers of the YRK Leadership Award pledged never to relent nor fail in this worthy course but that the award would serve as a boost to intensify more efforts and dedication in the third sector both as an individual and as an organization.  She further stated that she hopes to increase her circle of influence and encourage more youths into selfless service which has its own reward system which may not necessarily be monetary. “The YRK Award is a motivation to continue on the path I am on and strive for improvement and development” she concluded.