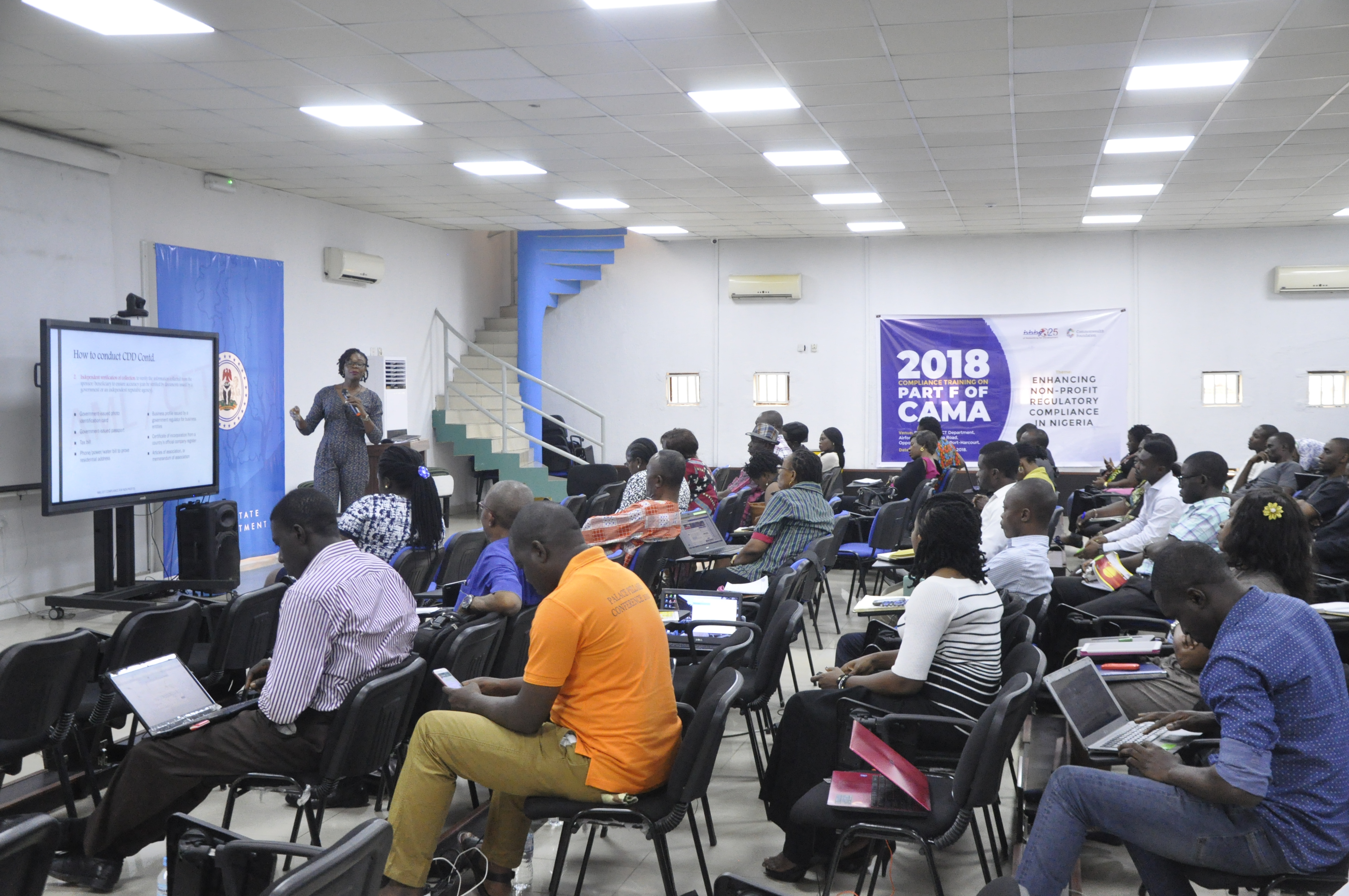 PORT-HARCOURT, Rivers–/ On October 22 and 23, 2018, the Nigeria Network of NGOs convened Nonprofit Organisations across the Eastern and South-southern regions of the country for a two-day intensive training on compliance to regulatory laws as it affects civil society.

The training which was conducted as part of activities for the project, “Strengthening Statutory Regulations for Civil Society Organisations in Nigeria”, aimed to improve regulatory compliance within the Nigerian Nonprofit Sector as participants were taken through NPO management and financial accountability courses alongside lectures on how to better promote transparency within their organisations, in line with global best practices.

“Our sector has been vilified for noncompliance in recent times but this lack of compliance has been majorly due to the fact that many NPOs are unaware of the laws and the changes that occur with them”, said Oyebisi B. Oluseyi, Executive Director, NNNGO. He added that NNNGO is fully committed to the protection of civic space and therefore saw the need to extend training to NPOs, across the country, on CAMA and other regulations. He expressed hope that the training would serve as an opportunity for heads of organisations present to build capacity in areas where they were previously lacking.

The star of the training was the Part F of the CAMA. CAMA sets out the legal basis by which companies are formed and managed. It also sets the rules for company boards and shareholders as well as the exercise of decisions on business growth and investment. It is, therefore, one of the most critical pieces of legislation which impacts the Nigerian non-profit and its relevance to ease of doing business cannot be overemphasized.

After 28 years since its adoption, the CAMA recently underwent a review process which resulted in the repeal and enactment of a newly amended law on May 15, 2018. The Incorporation of Trusteeship which is of principal concern to nonprofits, previously named the Part C of the CAMA was then renamed as Part F of CAMA.

Adeola Odunsi, Project Officer, Strengthening Statutory Regulations for Civil Society Organisations in Nigeria, presented to participants, a sample of the toolkit created by NNNGO for nonprofits to access as a Corporate Affairs Commission (CAC) registration guide.

She led discussions on the details of the reviewed CAMA while explaining that the toolkit would serve as a useful tool for engaging processes such as change of name, appointment, and removal of directors as well as how to set up a governing board within an organisational structure.

“Most NPOs cannot trace their sources of funding and this is what makes many prone to risks of being used as conduits for money laundering and terrorist financing”, said Chidinma Okpara, NNNGO AML/CFT Officer, while delivering a training on Anti-Money Laundering/Combatting the Finance of Terrorism (AML/CFT) Compliance for Non-Profits.

She recalled that the Nigerian Government has in recent times, expressed significant concerns about the rise of money laundering and terrorist financing, especially within the non-profit sector while noting that despite the large number of NPOs registered with the CAC, only, a significantly small number have registered with the Special Control Unit on Money Laundering (SCUML), in the past five years.

She maintained the need for heads of Nonprofits along with their staff, to undergo training on the amended Money Laundering Prohibition Act (MLPA) of 2011. Limitations on cash transactions and receipt as well as the process of conducting background checks on beneficiary or sponsors to ensure they are risk assessed of ML and TF before being on-board, especially on international payments relating to NPO programmes were part of points she highlighted during her training session.

“For accountability checks, every organization is required to have at the very least, a petty cash book, a cash book, a request form, and the reconciliation form”, noted Timothy Odion, Head of Finance, NNNGO. He concluded the two-day event by training participants on financial and organisational accountability while underlining the importance of daily record-keeping.

The workshop was open to all NPOs in the South-southern region of Nigeria. It is a pity that your organisation couldn’t be a part of that particular workshop but rest assured, more is soon to come. However, for this year, we are focusing on other geopolitical zones. We will share guides via email and it will be available to all paid members of NNNGO. Thank you!