With the aim to LEAVE NO ONE BEHIND while ensuring that people with Down Syndrome have equal opportunities to a rewarding and a fulfilling life, NNNGO’s Olaife Ilori, on World Down Syndrome Day, spoke with Grace Bakare, Author of THE PLIGHT OF PARENT RAISING CHILDREN WITH DOWN SYNDROME and Founder, Dewdrops Care Development Foundation.

Grace highlighted the challenges that come with DS and how she has been able to give her daughter the best. “My daughter does not have special needs; my daughter has the same needs as anyone else. She has a need to live at home with her family. She has the need for a good education, good friends, mad fun and a supportive family”

THE INTERVIEW : THE UNCONDITIONAL LOVE OF A MOTHER

WHAT IS DOWN SYNDROME?

Down syndrome is a common birth defect that is caused by an extra chromosome 21 (trisomy 21). It causes mental retardation, a characteristically facial appearance, and multiple malformations. It is a genetic disorder caused when abnormal cell division results in an extra full or partial copy of chromosome 21. Down syndrome occurs in approximately 1,700 live births. Abnormalities are varied from individual to individual, common features include; flat face with short nose, prominent skin folds, and small low-set ears.

WHAT CAUSES DOWN SYNDROME?

HAVE PARENTS DONE ANYTHING WRONG TO HAVE THEIR BABIES BORN WITH DOWN SYNDROME?

There is no link to anything in the environment or anything the parents did or did not do. If one has already had a child with Down syndrome, it is most likely to have another. It is not common, but it is possible to pass Down Syndrome from parent to child. Sometimes a parent has what experts call ‘’translocated’’ genes. That means some of their genes are not in their normal place.

SOME PEOPLE BELIEVE DOWN SYNDROME IS CONNECTED WITH SOME VOODOO OR DARK POWERS, HOW TRUE IS THIS MYTH?

Down syndrome has nothing to do with black magic, dark powers, or voodoo. There is no evidence to-date that it connects DS to do any shadowy, indistinct and nebulous folk tales.

IS IT OKAY TO ABORT THE BABY IF PRE-NATAL TESTING REVEALS THE CHILD IS DOWN WITH THE SYNDROME?

I believe it is not okay. It is an abortion which is seen as grave sin in my family. Some people believe terminating the pregnancy after early pre-natal diagnosis is right while others in the religious and anti-abortion group believe it is a sin. In the United States each year, more than 6,000 babies with Down syndrome are born, according to the National Down Syndrome Society, however, almost none are born in Iceland, that is because nearly 100% of women in Iceland who receive a positive test for Down syndrome choose to terminate the pregnancy. In fact the law permit abortions after 16 weeks if the foetus has a deformity. Iceland is not alone in having high termination rates. In Denmark, 98% of pregnancies with a Down Syndrome diagnosis are terminated. In France, it is 77% while United States reads 67%. In Nigeria Down Syndrome families are divided over aborting at pre-natal testing, but major cases of Down Syndrome births are not reported because of the traditional belief that are still associated with witchcraft.

WHICH PARENT DOES DOWN SYNDROME COME FROM?

It could either be from the father or the mother or from both, but it is widely believed that the gene is from the mother. It is a common knowledge that when women age, so are their chances of having a baby with a genetic abnormality. The most common form of Down syndrome is known as trisomy 21, a condition where individuals have 47 chromosomes in each cell instead of 46, Trisomy 21 is caused by an error in cell division which leaves a sperm or egg cell with an extra copy of chromosomes 21 before or at conception.

HOW WILL A CHILD WITH DOWN SYNDROME AFFECT THE IMMEDIATE FAMILY?

Having a child with Down syndrome will affect everyone in the immediate family, most especially young couples. When faced with life’s complexities, one is rendered speechless. At the birth of my daughter Oluwafemi Bakare, my husband was almost questioning my fidelity. ‘’Are you sure you have not been having extra marital affairs? I hope you are not cursed? These are some of the battalion questions my husband asked, while I kept pondering over my entire past misdeeds and judging myself. Whether you are an Agnostic, Atheist, Christian, Ethicist, Hindu, Jew, Moslem, Pagan, etc. you sometimes arrive at a point where you question your belief and wonder if the alternative is a better choice. It is at this point you would ask, “how do I speak with an angel?” an angel of any faith that will give you an answer. How does someone raise a child with Down syndrome and remain sane? How? How does one deal with the long therapy sessions and the bills that come with it? Is it their educational progress or skill acquisition as the case may be? This makes it even more challenging because of the birth defects. Indeed, having a child with Down Syndrome will create a lot of challenges, that is if it does not break the marriage sef. 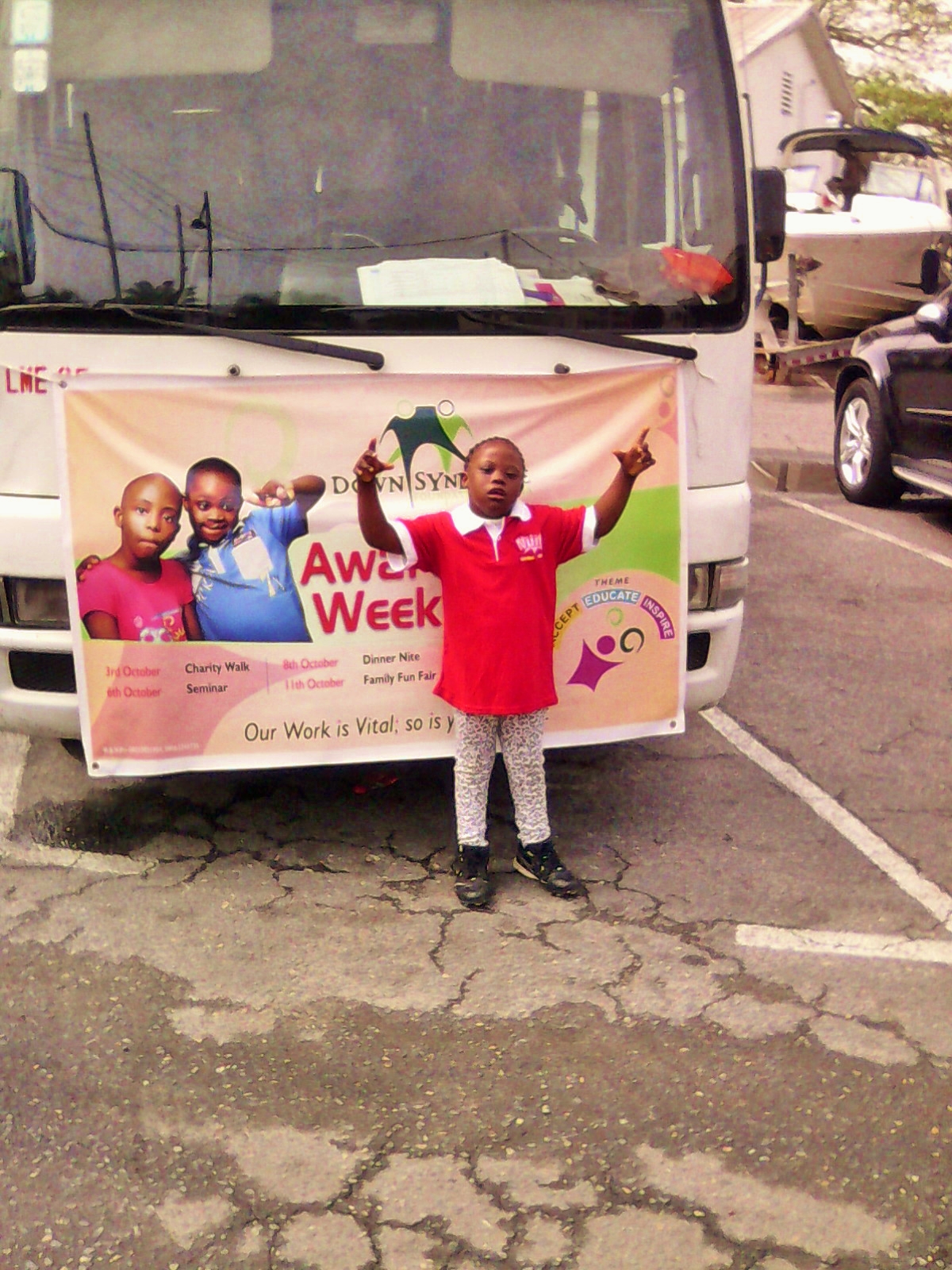 IS DOWN SYNDROME CONTAGIOUS?

Down Syndrome is non-infectious or contagious. It only affects the one who has it. It is congenital which means, a person is born with it. No one gets Down Syndrome later in life. It is one of the most common genetic birth defects that happens to a child.

DO YOU THINK THE SOCIETY EMBRACES/ACCEPTS PEOPLE WITH DOWN SYNDROME?

ARE THERE SPECIAL PROGRAMMES FOR CHILDREN WITH DS WHICH WOULD HELP THEM BECOME INDEPENDENT IN ALL SPHERES OF THEIR LIVES?

The most important influence on early development is daily interaction and activities with families. Families are encouraged to access early learning and intervention services that are available from infancy. This will support the development of some of the most important early childhood skills. Early intervention programs are helping children reach their potentials, with this in line, they can graduate to post school training or tertiary institutions.

AS A PARENT OF A DOWN-SYNDROME CHILD, HOW DID YOU RECEIVE THE NEWS AND HOW DO YOU COPE WITH TOUGH DAYS?

When I learnt that my baby had Down syndrome, I was shocked. Twelve years later, I look back and wish I could have encouraged myself much more than I did. Upon receiving my daughter’s prenatal diagnosis, I remember feeling a sense of soul-crushing hopelessness. Hopelessness of what my daughter’s life would be like. Hopelessness of what the diagnosis meant for me as a parent. Hopelessness of how different our family would be from the one I had imagined. I was changed forever with the news of having a daughter with Down syndrome. Today, looking back, I have come to replace that anxiety, sorrow and anger with strength, courage, dignity and determination. There was that stereotyped thought linked with DS; I imagined a life of zero potential, a life spent trapped in a corner unable to have a fulfilling life. An imagination which turned out exactly the opposite. Even during very trying days and I feel like giving up, Grace, my daughter with her beautiful almond-shaped eyes and captivating smile makes all the challenges surmountable.

WHAT WORRIES YOU ABOUT HER FUTURE?

What worries me about her future is in the area of marriage. The day she will leave me to stay on her own, who will be there for her like I do. But I know she will do just fine with or without me.

IS THERE TREATMENT FOR DOWN SYNDROME?

Yes, there are treatments for Down syndrome. Early intervention programmes with a team of therapists and special educators who can treat each child’s specific situation are helpful in managing Down syndrome children.

IS THERE A CURE FOR DOWN SYNDROME?

WHAT IS THE LIFE EXPECTANCY OF PEOPLE WITH DOWN SYNDROME?

A most useful advice I can give to a family with Down syndrome child is to learn as much as possible about the chromosomal disorder so they can deal with it squarely. Parents can also join an online parent forum or attend different seminars about living with a child with Down syndrome. And as the child grows, you can work with different therapists who would help improve their skills.

To that Down syndrome child who wishes to excel in life, I will preach FAITH, HOPE and DETERMINATION. Irrespective of any jest or bully made out of the child, he must keep the vision of where he is going vivid and alive, having it at the back of his mind that abilities abound in disabilities.